"The pirate of the seas, the scallywag of the ocean. Beware of, Swashbuckler!" Announcer

NAME: Swashbuckler, "The Scallawag", "The Pirate Bot of Pirated Parts"

Signature Moves: "To Davy Jones with Ya" "Broadside Bash", "The Gunpowder Chop"

Swashbuckler was known for being made from scraps. In fact, his generator was literally an old boiler taken from a discrete RV. This lead to the large smoke stack protruding from the bot's back, as well as the gaudy refueling gauge on his front-left. This was an obvious weak spot, so Jimmy covered it with extra, "security measures". This was Jimmy's main building philosophy. "If there is a weak spot, cover it in scrap-metal. And scrap-metal sure describes it, too. He used such metals as copper, tin, aluminum, brass, stainless steel, iron, and even zinc to fortify his bot. None of which are very durable metals, but he used such a large quantity that it was almost protective. The poor bot used to resemble a pirate, complete with pirate face-plate, bandanna, peg leg, and sailor color scheme. But as time went on, parts were constantly removed, rebuilt, or coated with scrap metal. Thus, the bot's once creative appearance all but disappeared. The aforementioned peg leg was never really fixed, however. It was once pure copper, and actually shaped like a peg leg. However, this gave the bot irregular posture and uneven weight displacement. It was ,as well, just a weak spot. So it was coated with scrap metal. However, Jimmy lacked metal at this time and instead used roof shingles. This is why the why legs are still uneven.

As a brawler, Swashbucklers main strategy was, "Just wing it". This included some pretty ludicrous actions, such as charging headlong into combat, and randomly swinging his arms in hopes of scoring a hit. His signature moves reflected that. His move, "To Davy Jones with Ya", was nothing but slamming down on the other bot, with the blunt of his arms, until they fell down or the move ended. "Broadside Bash", was simply holding his arms straight out, in a "T" position, as he ran at his foe hoping to clothesline them with his fists. "The Gunpowder Cop", was just a standard karate chop combo, except with a fist. It went high-left, high-right, low-left, low-right, center-both, right lash to head, midsection punch.

Swashbuckler was a junk-bot from California.  Not much was known about him but the fact that he was built from scraps.  His partner in most battles was a bot called Aftershock.  At some point in his life, Jimmy Atzerodt, Swashbuckler's creator went up against Rick O' Shay.  In this match Swashbuckler, working with Aftershock was destroyed.  He was repaired with different scraps, as was his partner.  Jimmy Atzerodt blaimed the loss on Yujinn Ng, Aftershock's creator.  He claimed that it was because of her lack of support that they lost.  After a long period of arguing, they eventually agreed to never work as a team again.

Jimmy eventually ran into Yujin again.  This time she challenged him to a fight.  This time Aftershock completely obliterated it's opponent.  Swashbuckler's parts were collected by a man named Craig Dumonte.  Craig created a bot named Infurnace, who lasted for a while but was cut down by another bot called Shining Armour, in Dorset.  Nooone knows were the parts are now. 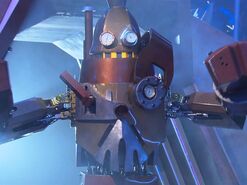 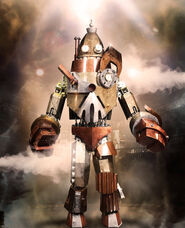 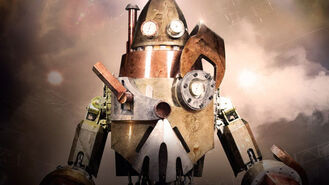 Add a photo to this gallery
Retrieved from "https://realsteel.fandom.com/wiki/Swashbuckler?oldid=47137"
Community content is available under CC-BY-SA unless otherwise noted.