*THIS IS FAN-MADE - DO NOT EDIT WITHOUT PERMISSION*

The Slaughter-Bot MK.2 was the successor to the MK.1. These little guys were mass produced to be a sparring bot for the common man. They were cheap, efficient, and easy to operate. They were reasonanably durable, but would never survive in the ring. While the Proton-Class sparring bots were more well known, they were never as plentiful. The Slaughter-bot's quickly fell out of style however, due to their human-like appearance and uselessness. Some bots however, did recycle parts from old slaughter-bots.  Crash Palace owned multiple units for rent and pre-match practice.  Although they died off quickly, they still had a great impact on the boxing world.

The Slaughterbot MK. 2 featured many unusual features. The first, was it's strange controller design. Called the "Exo-Skeletal Controlling Mechanism", this controller was mounted around the operator's arms, giving them complete control over the bot's limbs. This was, in fact, a low-cost equivalent to the famous "Shadow System" of the Proton-class sparring bot. The bot's legs were imovable. Due to it being a sparring bot, it was decide that movable legs were useless.

Like most of the stuff I make, this page uses picture from the now defunct "Robot Combat League" show. 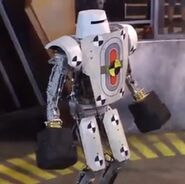 A Slaughter-bot belonging to Crash Palace

Powered up
Add a photo to this gallery
Retrieved from "https://realsteel.fandom.com/wiki/Slaughter-Bot_MK.2?oldid=47399"
Community content is available under CC-BY-SA unless otherwise noted.