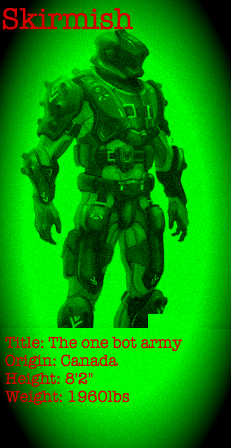 Winning Line: "It looks like Skirmish has emerged victorious again! Three cheers for the One Bot Army!"

Skirmish usually outplays his opponent with his longer-lasting power core than even your typical Canadian bot. This method, dubbed "War of Attrition", is widely used by Canadian handlers to outmaneuver and outlast opponents with lesser energy than them, especially in warmer countries. In Canada, bots are usually fitted with thermal inducers to prevent ice from forming and locking up the bot. This, in turn, uses up more energy. Thus, typical Canadian bots have stronger power cores than those from warmer countries to counter the faster depletion rate. These thermal inducers can be switched off, resulting in a much longer-lasting bot than usual, meaning that Canadian bots have a lifespan advantage over those in warmer countries.

Skirmish has an olive green paint job, with a Canadian Corporal's insignia on his shoulders. He has fake metal "pockets" and has exhausts on his shoulders. He has an insulating coat of carbon fibre mesh under his flexible kevlar padding to provide extra protection against the cold. His thermal inducers can work in reverse to cool him down in hot areas and his military-grade weather-resistant armor shields him against all sorts of hazards, including snow, water, fire and dirt. He can fight in any environment and withstand any weather condition.

After HarmOnium moved to Canada, they realised that robots based on greek mythology might seem out of place. Instead, they made bots that looked cool and dished out major amounts of damage. Decker was their first foray into Generation 4 robot building (Argus was upgraded to a G4, not built as one). Decker's victories were followed by his three successors, Shatterpunch, SyncShock and BeatBoxer, all built with a sleek and efficient design in mind. To counter these bots, Canadian manufacturer NorthWave.Co designed Amplifister and the triplets (Sydeline, Focal and Skirmish). Amplifister was a hit and the triplets followed after. All four used the same type of power core, but modified to suit their bot types and build. Skirmish specialised in resistance to extreme weather conditions, be it cold or hot. Focal specialised in identifying the enemy's weak spots and utilising pinpoint attacks to demolish his opponents. Sydeline was nimble and quickfooted, dodging opponents and crushing them from behind. The triplets often participated in 3v3 combat, incapacitating any enemy team in their way. They each complimented each others' strengths and fortified their teammates' weaknesses.

Retrieved from "https://realsteel.fandom.com/wiki/Skirmish?oldid=46348"
Community content is available under CC-BY-SA unless otherwise noted.