Sam Johnson has a MAJOR obsesion with Robot Boxing, for 14 years, he waited for a bot, until a TV add came up saying, IF YOU WANT A BOT COME TO THE WRB, before it's to late, Sam arrived at the last minute, and bought ONEWAY for 12,000 dollars.

Death of his Brother

Before Sam got Oneway, Sam was one of the most richest kids in his school, he lived a great life, until he was 12, his second brother, James Johnson, got into an accident. The car blew and a sharp pipe went through his head, Sam went to see him in the hospital, and the last five words he said were: "Do well in life, bro" and he passed. 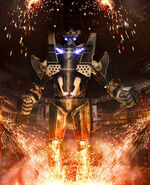 Add a photo to this gallery
Retrieved from "https://realsteel.fandom.com/wiki/Sam_Johnson_(Oneway%27s_owner)?oldid=15836"
Community content is available under CC-BY-SA unless otherwise noted.