Start a Wiki
This page is owned by SlayrGauge, DO NOT EDIT WITHOUT PERMISSION.

Kamikaze is a G2 'Bot that is currently under repairs in Exon Gauge's Workshop at Lansing, MI. His land of origin is Japan. Formerly a 3-time Underworld champion, Kamikaze was discriminated (due to not it looking like a human), yet, one of the strongest during his G1 days. He was Upgraded into G2 and competed in another Underworld Tournament, Due to the upgrades made, Kamikaze's mainframe malfunctioned, frying his circuits.

Kamikaze's colors are a resemblance of a Japanese WW2 Plane, which are: Dark Green, White, and Red.

His parts consists of upgraded parts from: Noisy Boy, Midas, Deepsix, and BlueBot.

Due to Kamikaze being G1, Judo and Karate have been implemented onto him. Most moves he has are on the offensive side of both styles. 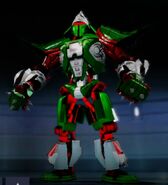 Another shot of Kamikaze.

The 3 Robots.
Add a photo to this gallery

Retrieved from "https://realsteel.fandom.com/wiki/Kamikaze?oldid=53152"
Community content is available under CC-BY-SA unless otherwise noted.