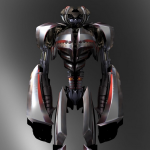 Title/Nickname: The Flurry Of Fury, The Lean Fighting Machine

Hyperion is a bot with the type Fragile Speedster. Now, don't get fooled by the Fragile Speedster thing as this bot is light, quick and packs a powerful combo. The defence may not be okay, but his Piston Arm feature and extremely thin body allow him to dodge like in seconds. He does have a unique ability which is called Duranium which is said to be out only during league matches where he fights for title or else or mostly in great panic. It is an extra layer/protection armour where the fists become sharper (spikes come out) and the body becomes bulkier. He then becomes a Demolisher Lv.3 and loses his speed while his strength and defence become the main priority.

Announcer's Quote: The Flurry Of Fury, You do not want to anger, Hyperion !

All Matches (In Random)

Hyperion vs Bluebot - K.O. by Hyperion

Hyperion vs Atom - K.O by Hyperion

Hyperion vs Aquabot - K.O by Hyperion

Hyperion vs Midas - K.O by Hyperion

Hyperion vs Zeus - K.O by Hyperion

Hyperion vs Spyder - K.O by Hyperion

Hyperion vs Blockbuster - K.O by Hyperion

Hyperion vs Gambit - K.O by Hyperion

Hyperion vs Metro - K.O by Hyperion

Hyperion vs Scarlett - K.O by Hyperion

Hyperion vs Sniper - KO by Hyperion (Courtesy of Tribound )

The Past Of Hyperion - Chapter 1

Hyperion wasn't originally owned by Pyronite..but before this long thing starts, grab your snack and drink, and lets get in to this.

As I said previously, Hyperion wasn't actually owned by Pyronite. He was owned by a guy called Beep (That's his nick, not real.) Pyronite actually didn't find him too. Pyronite's friend, Beep, had actually got a new bot who he said was better than Hyperion. Beep asked him on to a fight and Pyronite accepted. The winner would take 50 grand, along with Hyperion. Pyronite wanted a bot, Beep wanted someone to fight his new bot, and they fit each others condition exactly right.

The fight began. Pyronite found out the new bots name was Thrasher. The bell rang, and the bots emerged from their corners. Hyperion isn't the same as he is now, he was a more worn down bot with a few different parts. Thrasher started it with a combo of jabs, but Hyperion dodged them all as he was extremely fast. Pyronite knew how Beep fights, so it was easier for him. Sadly, Thrasher and slowly found out Hyperion's moves. After five minutes, Hyperion fell on the ground, in parts.

The Past Of Hyperion - Chapter 2

Beep felt sad for Pyronite, as he really wanted a bot. He said "Hey Pyronite, good match back there ! Look, I really know you wanted a bot and so, Hyperion's in pieces, so you get to take him home. I'm not gonna end up using him anytime soon for anything. We'll meet again soon, Pyronite." and he walked away.

Pyronite took him into his mini truck and started working on him. It was going to take a long time from now. A few days later, Hyperion looked like his old self. Pyronite was skeptical about him and took him to the Zoo. It wasn't Metro, it was Blacktop.

The bots went to their corners, and the bell rang. They emerged from their corners and both gave each other a right uppercut. Both the bots were stunned. Blacktop got out of his stun and approached Hyperion. Hyperion's amazing speed beat Blacktop's heavy hooks. Hyperion used the 1-2-5-1 combo, followed by a Core Refresh and a huge right uppercut. That moment was glorious. He had won 8 grand. He chose to come back, rest for a while.

Hyperion's second match was against Blockbuster. They had emerged from their corners, then threw rights and lefts at each other.

Retrieved from "https://realsteel.fandom.com/wiki/Hyperion?oldid=47661"
Community content is available under CC-BY-SA unless otherwise noted.