This page is owned by SlayrGauge, DO NOT EDIT WITHOUT PERMISSION.

Crusader is a G2 'Bot that currently resides in Detroit, MI. with his owner/creator and two other bots. His land of origin is Europe. He has participated in tournaments all around the world and the Crashpalace fighting tournament, and also about to enter the WRB after defeating Twin Cities in a K.O with a disconnected right arm and a partially active system.

Crusader's colors are: Light Gray, Light Gold, And Red. It resembles a Crusader Knight's appearance (Minus the Cross.)

His parts consists of upgraded parts from: Camelot, Juggernaut, BioWar, and Twin Cities.

Crusader has his own set of moves and skills that are projected as combos from Gauge's Controller. 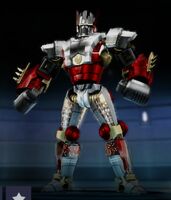 Another shot of Crusader. 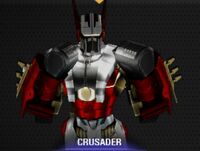 The 3 Robots.
Add a photo to this gallery

Retrieved from "https://realsteel.fandom.com/wiki/Crusader?oldid=53151"
Community content is available under CC-BY-SA unless otherwise noted.