Charlie Kenton (played by Hugh Jackman) is a main character in Real Steel.

BIO: Charlie Kenton used to be a pro human boxer in his prime, and was known as the 2nd best boxer in the world. However those days are long gone, since robot boxing took over.

Nowadays, Charlie is an underground Robot Boxing Trainer/Handler. Through his fights, he has gained much and lost more money, owing many people debts he can't pay off. In his fighting career, he's lost more bots than he can afford. He's hotheaded and pretty much always goes for the big gambles when he fights. His friend, Bailey Tallet, lets him stay at her father's gym and fixes up the bots he brings in. Charlie is the father of Max Kenton.

Charlie, was said to beat number 2 in the world ( Nicko Tandy).

GAMBLING PROBLEM: Throughout the movie Charlie is shown to have a huge gambling problem. Shown when he willing bets Ambush would beat the bull called Black Thunder, bets that Noisy Boy would beat Midas without knowing how to handle Noisy Boy, buying Max from his Aunt, and wanting to sell Atom to the Russians to be a sparring bot for Zeus. It's shown as a common knowledge that each character is aware of Charlie's gambling problems.

MAX AND CHARLIE: At the begining, Max and Charlie didn't have a good enough relationship because one: Charlie left Max's mother when she revealed she was pregnant with Max and two: "buying" Max from his Uncle Marvin so he and his wife goes to Italy for two weeks and Charlie spends the money on buying Noisy Boy. Charlie doesn't listen to Max's advice when he advises on making Noisy Boy fight lower rings than instead fighting Midas. There are times Charlie shown to care about Max when Max fell down a cliff and temporarily giving Max to his Aunt to protect him from Charlie's violent life.

ATOM AND CHARLIE: At first Charlie just saw Atom as just another robot. He soon recognized that Atom had potential of being a fighting robot so after Max convinced him to train Atom how to fight, Charlie, in his own way, bonds with Atom while training Atom to box. Charlie, like Max, begins to notice that Atom might have human-like emotions and tells Atom, "Look at me, watch me, I'll protect you, do what I do!" to him after Zeus damages Atom's voice headset.

Personality: Charlie is stubborn, cocky, and a troublemaker. These traits were passed to his son Max (both being cocky AND stubborn).

Ambush (destroyed by the bull Black Thunder in a Texas county fair and rebuilt as Ambush 2.0 ) 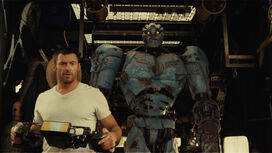 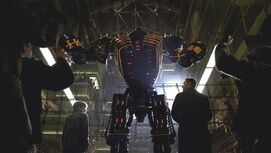 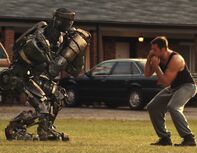