The Bot Out Of Hell

Jack Of All Stats

Nickname: The Bot out of Hell

Bot Type: Jack Of All Stats

Blacktop was originally built as a mascot for the Hell's Teeth Motorcycle Club, however, the club owners decided to go big, so they delved in on the boxing sport. Surprisingly, Blacktop's popularity increased pretty fast. Blacktop became so popular that he soon became a regular fighter in the Underworld, fighting at the seediest bars and illegal match-ups.

Announcer's Quote: "From the darkest corner of the Underworld, it's Blacktop!"

Blacktop is one of the many fighters seen fighting Atom before his jump to the WRB. He is seen in a parking lot, fighting Atom, before tiring out. Atom attacks him, and finishes him off by giving him a right hook directly into a car's hood. Not much else is known about him. 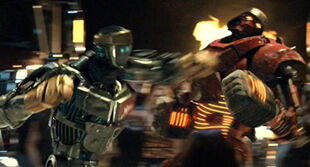 Blacktop getting pummeled by Atom
Add a photo to this gallery

Blacktop appears to have particularly thick armor. He is mostly red with black trim, and he wears a black helmet modelled after a German soldier's helmet or a biker's helmet. The sound of an engine revving is heard as he moves, and he appears to emit exhaust with each punch. He has three glowing red rings on his chest, reminiscent of motorcycle gauges.

Blacktop is the third figher in UW II after Six Shooter and Blockbuster. He is heavily improved from his iOS version. He has pretty good armor and power but has weak special. 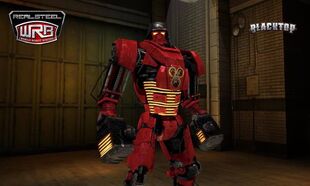 Retrieved from "https://realsteel.fandom.com/wiki/Blacktop?oldid=52379"
Community content is available under CC-BY-SA unless otherwise noted.