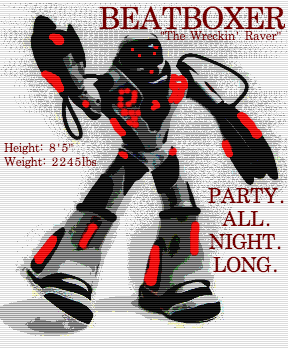 BeatBoxer looks good, hits good, and glows. Nuff' said. Watch out for his tech moves though, they're as ballistic as his operator's rapping skills.

After HarmOnium moved to Canada, they realised that robots based on greek mythology might seem out of place. Instead, they made bots that looked cool and dished out major amounts of damage. Decker was their first foray into Generation 4 robot building (Argus was upgraded to a G4, not built as one). Decker's victories were followed by his three successors, Shatterpunch, SyncShock and BeatBoxer, all built with a sleek and efficient design in mind. BeatBoxer was sold to a rapper who won Decker with his own bot, Folley Fighter. Folly Fighter was badly damaged in the fight, though, and was later scrapped for its neon capacitor. This was used on BeatBoxer, who went on to win many a bar fight, against bots like DisAssembly and Dire Drinker. BeatBoxer was then enlisted by Harmonium's recruiting department. However, when they realised that Mino Fabrio (aka Draconic), his handler, was very good at what he did, they had BeatBoxer upgraded, and even installed new tech moves for Fabrio to use in his matches against NorthWave.Co and REgrade Enterprises.

Retrieved from "https://realsteel.fandom.com/wiki/BeatBoxer?oldid=37546"
Community content is available under CC-BY-SA unless otherwise noted.